In 1946, with the postwar economic boom just beginning, William Russell “Russ” Kelly started Russell Kelly Office Service, which offered to pick up typing work from customers and complete it at his office. It wasn’t long before one of Russ’s customers called in desperate need, not for work to be picked up, but for a worker to fill in for his secretary who hadn’t shown up that day. Following his service-oriented instincts, Russ offered to loan the customer his own secretary for the day.

Then a steel company called. They needed help with payroll, but were reluctant to send sensitive company records over to Russ’s office. They asked if he’d consider sending one of his typists to their office to do the work. These customer requests gave Russ an idea. He realized that booming Detroit-based businesses wanted clerical help to come to their offices, often for short or last-minute assignments. 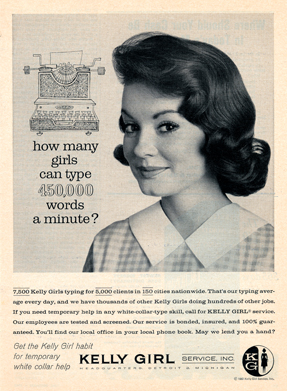 His idea? Instead of picking up typing work and doing it in his own office, he’d start sending his two employees on temporary assignments to wherever they were needed. From Russ’s small office in Detroit, that idea quickly caught on.

With a qualified staff ready at a moment’s notice, Russ saved his customers time and money. Thus, the modern staffing industry was born, and so was the iconic Kelly Girl.

Russ had always been proud of the name Kelly Girl, which had been coined by his temporary employees in order to more easily identify themselves when working in the customer's office. The term gained national recognition for quality temporary employees. As a result, the company changed its name to Kelly Girl Service, Inc. in 1957.

Russ leveraged the Kelly Girl brand and made it a household phrase synonymous with temporary staffing. In those early days, the company proudly displayed images of smiling women seated at typewriters, and rented buses with banners proclaiming “more Kelly Girls going to work” as they transported Kelly employees to customer locations. 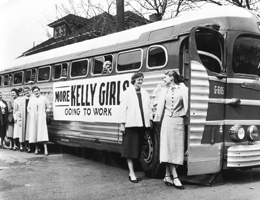 In 1966 the company became Kelly Services, Inc., a name that would more accurately cover a variety of services as the company continued to evolve. 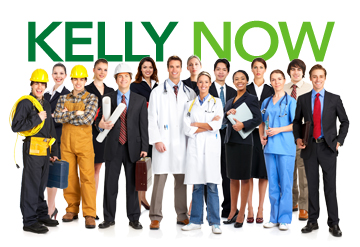 Leading the way and standing out from the crowd, Kelly Services has remained the most trusted name in staffing—and has come through the decades with a well-earned reputation for service excellence and innovative workforce solutions. The Kelly Girl brand will always be an integral part of the company’s heritage; because the Kelly employee in the early years and the Kelly professional today are strikingly similar, helping companies achieve their goals in the ever-changing world of work.